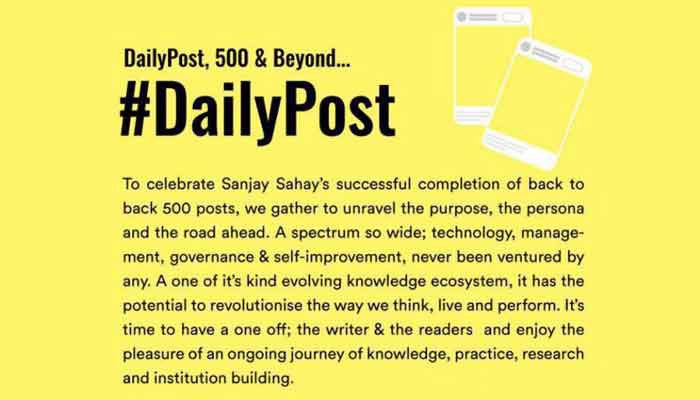 The World is Flat is the book authored by Thomas Friedman which brought to the for the real nature of digital world & what endless possibilities it holds. Crowdsourcing is one such tool. Though in vogue for a long period of time; the Oxford English Dictionary was created in that manner, the advent of mass communication technology made it immensely feasible. Wikipedia happens to be an iconic example. The possibilities can only be limited by our imagination. In the exponential change, it’s a tool of critical importance.

The term “crowdsourcing” was coined in 2005. The editors of Wired, Jeff Howe & Mark Robinson, described how businesses were using the Internet to ”outsource work to the crowd.” It led to the portmanteau “crowdsourcing.” It is an act of an institution or company to take work once done by the employees to an undefined network of people. It’s an open call. Large number of models of outsourcing have emanated depending on various combinations of improved costs, speed, quality, flexibility, scalability, or diversity. Whatever might be the model, IT mediation is the key. The model evolves on this basic pre-requisite.

Ideas rule the world. To get novel ideas & solutions Inducement Prize Awards, has become the format of digital age. These can also be called open innovation platform and there are lots of them. If you have talent it can mean a bounty for you. Even governments use this tool. ”The X Prize Foundation creates and runs incentive competitions offering between $1 million and $30 million for solving challenges.” This is the most sought after prize for any technologist. It’s facilitating in create tools to solve global problems.

Funding of a project is no easy job and that to of an entrepreneur or even a student. The digitally connected world has evolved a tool of funding, which has been quite effective; Crowdfunding. It is a crowdsourcing of a different kind. Only idea has value. With ideas & funding hitting the same source; crowdsourcing, exponential change is around the horizon.

CROWDSOURCING IS THE MULTIFACETED TOOL OF IDEAS & BUSINESS.